Taking a Detour for Epilepsy 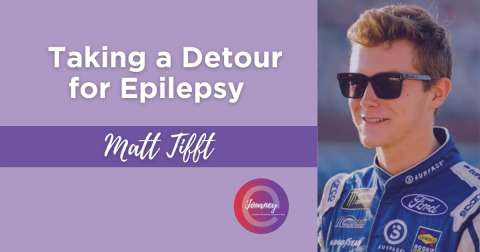 For 25-year-old former NASCAR driver Matt Tifft, taking a detour from his racing career due to an epilepsy diagnosis was not in the plan. Nevertheless, Tifft went from driving in the NASCAR Cup series with Front Row Motorsports, to being NASCAR’s youngest co-owner of a Cup series team with Live Fast Motorsports. Today, Tifft is looking to leverage his platform to create awareness about epilepsy and help others struggling with seizures.

Tifft was diagnosed with epilepsy in 2019, the same year he started his Cup series career. Due to recurrent seizures, he had to put his racing career on hold. This led to anxiety, which he says at times, is still a constant day-to-day struggle.

“Epilepsy is the hardest thing I have ever experienced,” he said. “When I first found out, it felt like a burden I had to deal with alone. I didn’t want to tell anyone because of the stigma attached to it. I didn’t want to leave the house for fear of a seizure coming on in public and not knowing what to do.”

Eventually, the secret of his epilepsy weighed heavily on him. Tifft said he was depressed and angry because he thought he’d lost his whole career. He felt like he was a patient and not Matt. He had to rediscover who Matt is. Tifft sought out information about epilepsy and met with doctors to find available treatments that may help control his seizures.

He also read numerous stories about others’ epilepsy journeys. He began to see that there was a sense of togetherness among people with epilepsy, and he longed to feel that same sense of community.

“I wanted to connect with a community of people like me,” he said. “I first told close friends and family before going public with my diagnosis, and it was such a relief to share my story with them. I received an overwhelming positive response. I realized that there are all these people I know that either have epilepsy or know someone who does. If they can go on and live their lives, I can too.”

Tifft’s seizures are now controlled, and he is back to driving street cars. Although, he is not back in the driver seat of a race car, as co-owner of a Cup series team, he is back in the racing scene and using his platform to give back and bring awareness to epilepsy.

“There’s a lot of good I can do,” he said. “I thought I was done with NASCAR and racing, but I found another thing within the racing world in which I can still be involved. It’s an opportunity for me to share my story and bring awareness about epilepsy any way I can. It’s a dream come true. It’s really been a blessing.”

Tifft was also recently named to Forbes Magazine's prestigious “30 Under 30” class of 2022.

“This is an incredible honor, especially as someone who has overcome an epilepsy diagnosis,” he said. “This recognition opens more doors for me to keep the conversation going. The more I can talk about my epilepsy journey, the better. I want to help destigmatize epilepsy, help others find acceptance, and make sure they know they can still be themselves and fight.”