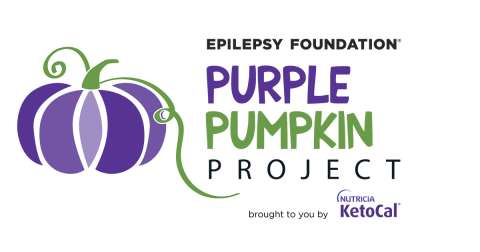 Join us to paint your pumpkin purple and help raise awareness for epilepsy!

Autumn is here and if you are like us, you are ready for cooler weather, warm apple cider and gourds and pumpkins everywhere! This fall, the Epilepsy Foundation needs your help to raise awareness and funds for the epilepsy community. Join the Purple Pumpkin Project and paint your orange pumpkin patch purple.

Register for the Purple Pumpkin Project

When you register, you'll receive a fundraising page to tell your story and have access to tips and tricks for how to decorate your pumpkin.

Raise Awareness and Funds with the Purple Pumpkin Project. Over 3.4 million people live with epilepsy in the United States. That’s a lot of people! Our Purple Pumpkin Project raises money to assure them that they are not alone. Display your Purple Pumpkin, and post your story and photos on your fundraising page and via social media to build awareness about epilepsy and support the Epilepsy Foundation in the fight to END EPILEPSY. It’s amazing what a small can of purple paint and a fruit can do. (yes, pumpkins are fruits!)

The Origin of the Purple Pumpkin Project

While on a drive through Connecticut one Sunday morning with his family, founder Ron Lamontagne was brainstorming ideas on how to spread epilepsy awareness. The local pumpkin patch provided the solution. Since kids would soon be carving and decorating pumpkins, he thought why not make one purple and tell people about epilepsy when asked, “Why is your pumpkin purple?”

Why is Ron’s pumpkin purple? 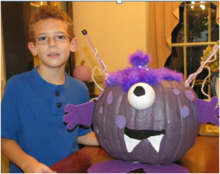 Ron’s youngest son was diagnosed with epilepsy in 2009 at the age of four. Since the diagnosis, Ron has seen how epilepsy impacted his son. Although he appears like an average kid on the surface, his son has experienced major challenges academically, physically and socially. Additionally, the misperceptions and fear about epilepsy have impacted relationships in the family.

Although Ron has been outspoken about the challenges his son faces, many people still choose to keep their seizures private. By raising awareness, Ron hopes to support those people and increase overall awareness of epilepsy.

How did it start…?

Ron started the Purple Pumpkin Project Facebook page on September 2, 2012. Within two days, the page had likes in all 50 states; it reached more than 500 likes in the first three days. Ten days later, the page surpassed 1,000 likes, and photos of many people’s purple pumpkins started pouring in.

Interest in the Facebook page sparked the participation of three different families who created purple scarecrows for a community event in support of the Purple Pumpkin Project (PPP) and epilepsy awareness. In a short time, PPP events started popping up unexpectedly, including:

By mid-October, 2012, the majority of the followers for the PPP Facebook page were located in the U.S. However, there were also quite a few followers from the United Kingdom, Canada and Australia. The PPP Facebook page even reached a few people in Ireland, Germany, Romania, India, Mexico, Sweden, Singapore, Spain, Italy, Hong Kong, Denmark, Belgium, Bangladesh, Uruguay and even Cape Verde and the Marshall Islands.

On October 21, 2012, Ron and a few friends from the Epilepsy Foundation Connecticut’s parent support group organized the first official Purple Pumpkin Project Event. The event brought in many more people than was expected. State Senator Terry Gerratana stopped by and personally wished the PPP well. NBC 30 News also sent a crew to interview and video for a news clip for the evening news. The event unexpectedly raised roughly $800 for the Epilepsy Foundation Connecticut through unsolicited donations.

The events also sparked people to share their own stories. People spoke about the positive impact of their brain surgery and about keeping their seizures secret out of fear. A family in Northern New England shared about the difficulties they were experiencing with their daughter’s school and about not getting the services she needed to be successful in school. People talked about relatives who struggled with seizures and even spoke about family members lost due to seizures. After seeing her school support the PPP, a high school junior was brave enough to start sharing with her friends about her absence seizures and need for extra help instead of writing it off as being a "ditsy blonde" as she had for so many years. PPP events presented an opportunity to talk about the stigma of epilepsy and the impact epilepsy has had on each person’s life.

The PPP Facebook page has grown expediently. Local Epilepsy Foundation affiliates and other organizations around the country are spreading epilepsy awareness through purple pumpkins.

"How will you answer, “Why is your pumpkin Purple?"