What are infantile spasms and what do they look like?

Infantile spasms (also called IS) are also known as West syndrome because it was first described by Dr. William James West in the 1840s. These seizures may be subtle and be confused with other normal baby behaviors or colic. IS can appear in different ways. Sometimes they may called “‘flexor spasms” or “jackknife seizures” due to their appearance.

Babies with infantile spasms often seem to stop developing as expected. Or they may lose skills like sitting, rolling over, or babbling. Often babies lose interest in their surroundings. They may interact less socially too.

Infantile spasms are considered an age-specific epilepsy. They typically begin in an infant between 3 and 8 months of age. In most children, IS starts by 1 year of age and usually stop by 2 to 4 years of age.

IS is not common. Only one baby out of a few thousand are affected.

Two out of 3 babies with IS have some known cause for the seizures, however the range of causes is broad.

How are infantile spasms diagnosed?

How are infantile spasms treated?

It is essential for infantile spasms to be treated as quickly as possible with the most effective therapies. Treatments that should be tried first before other therapies for children with infantile spasms include

If infantile spasms continue despite treatment with ACTH or steroid and vigabatrin, children should be seen by a pediatric epilepsy specialist to consider the best course of therapy.

Epilepsy surgery should be considered early in a select group of children who have a focal area (specific location in the brian) leading to the spasms. This includes some children with tuberous sclerosis complex or malformations of the brain.

The ketogenic diet has been reported to be safe, well tolerated and possibly effective for treating children with infantile spasms who do not respond to ACTH or steroid and vigabatrin.

What's the outlook for children with infantile spasms?

The first description of infantile spasms was by English physician Dr. W. J. West, more than 170 years ago. His description is as accurate today as it was then and is very poignant since he was describing his son.

“The child is now near a year old; was a remarkably fine, healthy child when born, and continued to thrive till he was four months old. It was at this time that I first observed slight bobbing of the head forward, which I then regarded as a trick, but were, in fact, the first indications of disease; for these bobbings increased in frequency, and at length became so frequent and powerful, as to cause a complete heaving of the head forward toward his knees, and then immediately relaxing into the upright position, these bowings and relaxings would be repeated alternately at intervals of a few seconds, and repeated from ten to twenty or more times at each attack, which attack would not continue more than two or three minutes; he sometimes has two, three, or more attacks in the day; they come on whether sitting or lying; just before they come on he is all alive and in motion, making a strange noise, and then all of a sudden down goes his head and upwards his knees; he then appears frightened and screams out; at one time, he lost flesh, looked pale and exhausted, but latterly he has regained his good looks, and, independent of this affection, is a fine grown child.” 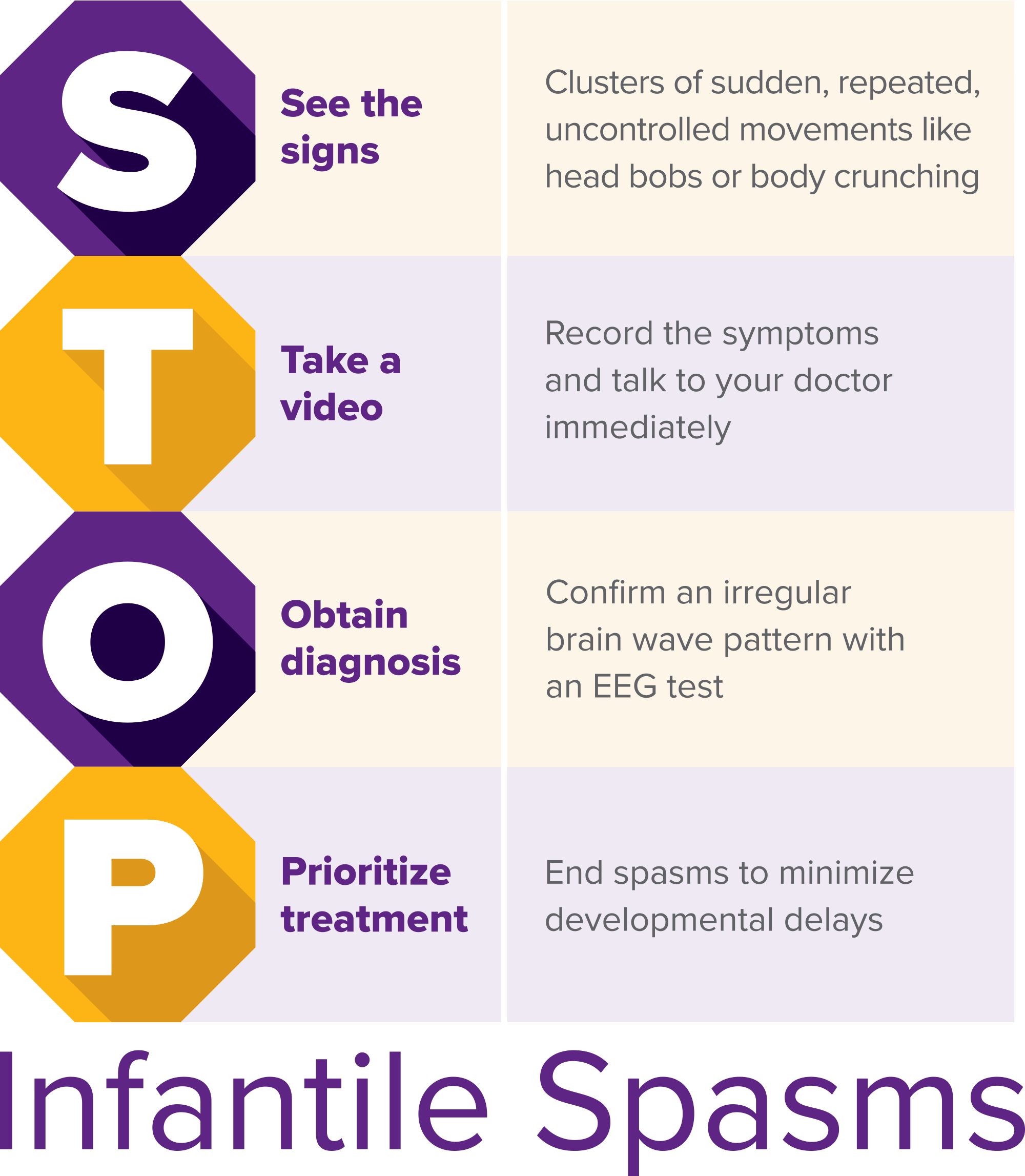 Although awareness efforts are year-round, Infantile Spasms Awareness Week (ISAW) is held annually on December 1-7. During ISAW 2017, the ISAN introduced the "STOP Infantile Spasms" mnemonic, an easily remembered acronym, to raise awareness about this rare, yet serious seizure disorder.