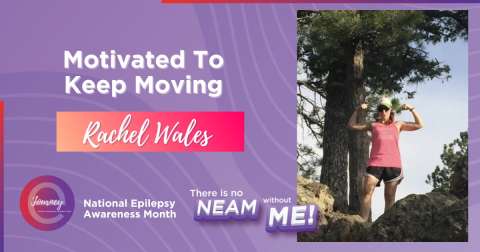 I have suffered from JME juvenile myoclonic epilepsy (JME) since I was 13 years old, which caused me to lose consciousness and control of my bladder when I experienced a seizure. I remember having my first tonic-clonic seizure in the bathroom of my parent’s house the morning of my middle school Halloween party.

For years, I struggled to attend high school while trying different medications and therapies, but still suffered breakthrough seizures. I think what they say is true, though, “sometimes the cure is worse than the disease.” That was the case for me. While my anti-seizure medications (ASMs) were helping reduce the number of seizures, they also caused weight gain, gastrointestinal issues, and fatigue. My hair was falling out which, as a young woman, was my worst nightmare. I was worried people could look at me and tell something was wrong. Before losing my hair, I was able to hide my epilepsy as an invisible disease.

Trying to have a normal teenage life was difficult and seemed impossible at times. I couldn’t drive, go to parties with my friends, or attend my high school graduation because I was afraid I would have a seizure. I also had to stop playing soccer, which at the time was my escape from the reality of my life. At one point, my illness became my identity and I hated that. I lost friends, I was sick, and I became so depressed that I didn’t see anything positive or hopeful. I wanted a way out, and my mental health was so damaged that at one point I contemplated suicide. I was treated like I was breakable and incapable of achieving what everyone else could by everyone around me, which made it even worse.

One day I decided to change all of that. With my neurologist’s approval, I started the ketogenic diet for seizures and got back into soccer. I also started therapy, which was a major turning point for me. By the time I turned 18, I traveled by myself to London for a tryout with Arsenal Women’s FC. Two days prior, I had suffered another grand tonic-clonic seizure, but I didn’t let it stop me. I was determined to live my best life. I met people in support groups along the way that I learned later passed away in their sleep from Sudden Unexpected Death in Epilepsy (SUDEP). I adopted the mindset that I couldn’t be wasting time because I had no idea if I might be another person with epilepsy that doesn’t wake up in the morning.

When I got back to Chicago from London I enrolled in college and eventually was able to achieve my goal of obtaining a master’s degree. Now I’m working with children with disabilities in the unique career field of environmental education and horticulture therapy.

I am currently 11 weeks out from my hysterectomy surgery after an endometrioid adenocarcinoma diagnosis back in June. While I haven’t been able to train that long, I decided to run and fundraise for the upcoming Epilepsy Foundation of Greater Chicago 5K.

Even though I continue to face new overwhelming and medical hurdles, I have never looked back. I use it as motivation to continue to grind and work harder. Athletics is my sense of normalcy and freedom. It also allows me to give back and make a difference, so that aspect helps keep me going.