It’s Important to Talk About Epilepsy 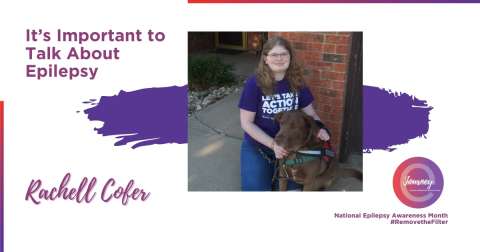 I had my first seizure at the age of 5, but I was not diagnosed with epilepsy until I was 8 years old. I had a tonic-clonic seizure that lasted over an hour. I have many different forms of epilepsy and different types of seizures. Since I have intractable epilepsy, it is not well-controlled with medications and other treatments. I have had two brain surgeries and they have helped some. I no longer have tonic-clonic seizures, but I still have other types of seizures.

Living with epilepsy is a challenge because there is so much that people do not know or understand. People don’t know what to say to you or how to act around you. I deal with depression and learning disabilities, and I have been treated poorly because of these challenges.

I have seen how epilepsy does not only affect me, but also my family and friends. But I learned to accept myself. I don't let epilepsy stop me from living my life. I have learned so much about epilepsy and have had opportunities that I never thought I would. Through my experience, I became an advocate for people like me!

It is important to talk about epilepsy with your family and friends. Understand that epilepsy does not make you any less important or capable of doing the things you love.

Even though I am still not seizure-free, I am also not giving up!