Be the Good - Robby's eJourney 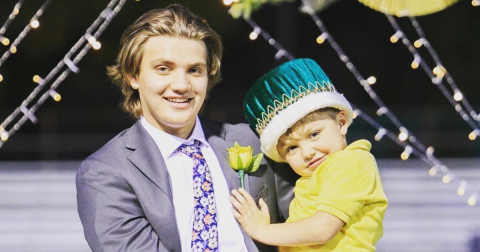 Be the good. Yes, I know it is a short sentence, and to you it may seem sort of vague, but to me it is full of meaning. To me it is a post-it note on my mirror that I look at every morning when I wake up. It is a small tattoo on my inner elbow that I see every time I look down. It is the message that keeps me going. It is also a play on words due to the fact that my last name is Good. Be the good simply means: be optimistic, be positive, don't be negative. Lift people up rather than put people down. Speak your mind; do what you have to do to seek change.

Growing up I faced a lot. I never faced bullying or anything negative in school, but my home life was a lot different than anyone could have guessed. My father was never around, and my mother was in and out of jail for the majority of my life. During this time, I was being raised by my grandparents. They became my legal guardians until my mom was able to get her priorities together. My dad was not around, so my pappy and uncle taught me what it was like to be a man from the time I could walk up until they passed away. My pappy was a strong man who worked all of his life, and the same goes for my uncle; he was a fighter. He battled osteosarcoma three different times.

The first time was fast; he had his shoulder operated on and went through treatments and was good; however, the second time was scary. All of a sudden he could not walk. He was paralyzed, and the doctors did not think he would ever be able to walk again. He did, though, and he went back to work and got promoted even after being on sick leave for over a year. The final stint was the worst. He had just gotten home from his honeymoon when he fell ill. He was in a coma for days. The doctors didn’t think he would wake up, but he did and lived for several months until one day when surgery took his life. He was a fighter, and he was optimistic; he inspired me to be that way, too.

Earlier I mentioned my pappy; he had cancer throughout his body, and he knew for months but did not tell anyone, he gave up. Near the end of his life, I was kept up at night because I could hear him moaning in pain. He was my father figure, and he was dying. I was overly stressed and sleep deprived because of it. Due to all of these stressors I developed a seizure disorder. I was scared; I didn’t know what was happening, but I did have the lesson that my uncle taught me, and that was to fight and be optimistic.

I overcame the disorder, and I’ve been seizure free for years now. It is because of what those two men taught me. I took what they taught me and started to apply it to other people, too. I started a fundraiser for the American Cancer Society at my school, and I also am an ambassador for Kids with Sarcoma. I write letters to kids each month to make them smile. My goal is to have many people follow in my path and be the good.

I want everyone to know that it is okay to be different. You can play basketball and be in theatre at the same time. Be yourself and inspire others to follow their dreams. That has been my goal and it’s all because of one short phrase: Be the good.