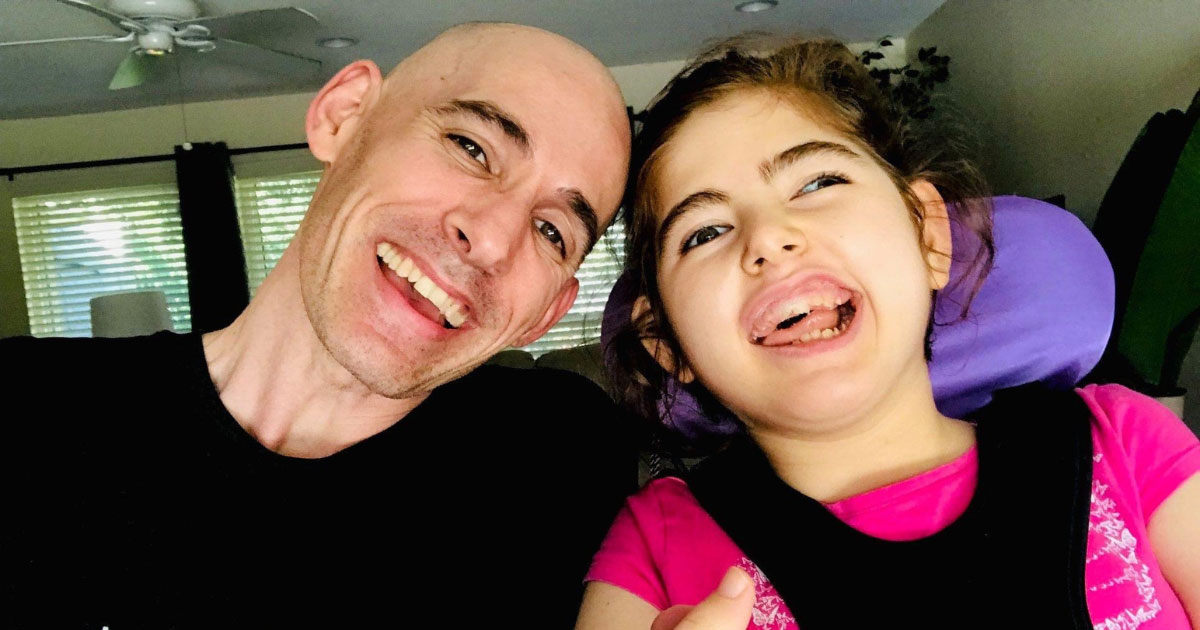 Managing seizures, anti-seizure medications, and lifestyle changes can be incredibly overwhelming when a person is first diagnosed with epilepsy. Because of this, members of the epilepsy community need a strong support system to help them through tough times. Caregivers are the resilient individuals who do all they can to ensure the health and wellbeing of their loved ones with epilepsy. Just like we share the stories of people with epilepsy, we also spotlight the incredible work of the caregivers in our community.

Jon Scheinman is a member of the team at the Epilepsy Foundation. Jon is also a caregiver to his daughter, Olivia (Livy) who has epilepsy. For the past eighteen years, Jon and his family have educated hundreds about seizures and epilepsy to help reduce stigma and provide insights about what it means to be a caregiver for someone who experiences frequent seizures. Jon has also graciously shared his story on several online platforms to teach others the importance of advocating for the epilepsy community.

“My family is just one of millions of families on this long, difficult journey,” said Jon. “Everyone’s experience is different. But, when we work together toward a common goal, we can make a tremendous impact.”

Livy, who is now eighteen, had her first seizure just hours after she was born. From that point forward, life was a series of tests, hospital stays, doctors’ appointments, medications, and device alarms.

At the time, social media was not as popular, so connecting with other families who were experiencing something similar was difficult. Jon and his wife leaned on their network of friends and family for support and did their best to connect with other families facing epilepsy via the internet. “What we did find were hospitals and epilepsy programs that provided hope about diagnosing her and providing treatments,” said Jon.

As Jon and his family researched ways to help Livy, they learned more about the obstacles that come with caregiving. “The biggest obstacles we faced were times when her seizures became uncontrollable even with emergency medication,” said Jon. “We always had a plan in place and when that failed, our last resort was going to the emergency room. We also made sure we had family or friends to watch Livy’s twin sister, Hailey, when we both had to be there for Livy.”

As of today, Livy has tried over a dozen anti-seizure medicines and the ketogenic diet. She has also been through two major brain surgeries to try to manage her seizures. Livy still takes five anti-seizure medications regularly but continues to struggle with seizure control.

At first, it was difficult for Jon and his family to focus on any type of self-care due to Livy’s severe and consistent seizures. However, over time, they found a way to cope with some of the stress that comes with caregiving.

“We found ways to take breaks, release stress, and recharge such as long walks, exercising, and crying/venting sessions,” said Jon. “We also protected the time with Livy’s sister, Hailey, to provide her with a happy and memorable childhood that did not only include hospital rooms, doctors’ offices, and medical supplies.”

Jon and his family also make it a point to participate in fun activities together on a regular basis. “We love to watch movies. Livy responds well to both video and audio and is captivated the moment the TV is turned on,” said Jon. “We enjoy our Saturday game nights as well. We play a game called Rummikub and Livy helps me pick the tiles. Although she cannot actively play, she is at the table helping me along the way. Livy loves spending time with her sister. She also likes to go for walks and experience nature. We can tell by her smile that she appreciates the sights, sounds, and fresh air.”

Jon also makes a point to take time for himself outside of family time. Jon is a health and fitness fanatic. Not only does he enjoy fitness, but working out helps him stay in shape to better deal with the physical demands of being a caregiver. He spends many of his nights helping Livy get her exercise as well. Jon also adds that he’s a huge movie enthusiast! “I grew up working in a movie theater where I fell in love with the silver screen,” said Jon. “That passion for watching meaningful stories and incredible characters has stayed with me to this day.”

Giving Back as a Family

It would be an understatement to say that Jon and his family lead very busy lives. However, this never stopped them from doing their best to give back to the epilepsy community at large. Before the COVID-19 pandemic, Jon and his family would bring Livy to her sister’s classroom each year to educate them on epilepsy and seizures. For Jon, it was important to show Hailey’s classmates that differences amongst one another should be accepted. The more that children and teens understand about seizures, the less likely stereotypes and stigma will persist.

In addition to classroom talks, conferences, and events, Lemonade for Livy has become one of the most recognized fundraisers for the Epilepsy Foundation.

The first Lemonade for Livy stand was held by Hailey and Livy’s friends. They wanted to raise funds for Livy and her medical costs. “It didn’t take long for us to recognize the opportunity and changed the purpose to raise funds for epilepsy research at the Epilepsy Foundation,” said Jon. “It was also a way for kids to share their stories of epilepsy with others, in many cases, for the first time. Our goal was to have a stand hosted yearly in every state around the country which we succeeded in doing.” Lemonade for Livy has raised close to $1 million since it began.

Advice for Other Caregivers

While Jon and his family still experience the challenges of epilepsy on a daily basis, he wants other families to know that they are not alone in this fight. Many families still have difficulty getting answers about what to try next when it comes to therapy for their loved ones. If you can, Jon recommends visiting a level 3 or 4 epilepsy center if seizure control is a problem. Jon also adds, “If your child has a specific rare epilepsy syndrome, research to see if there is an organization dedicated to your child’s genetic condition.”

Moving forward, there are a few things Jon hopes to see advance in epilepsy care that will help people like Livy.

“I would like to see genetic testing become the standard before the first medication is prescribed. We know enough now about seizures caused by genetic mutations and which medication works better for those types of conditions. As the science continues to improve, changes in treatment processes and insurance coverage of the costs should follow suit.”

In addition to genetic testing, Jon would like to see newer medications that specifically target genetic conditions that cause epilepsy. Ideally, these medications would be cost-effective and be developed more quickly.

Aside from scientific advancement, Jon’s wish for the community is to stick together in the name of a greater goal. “My hope is that when families are at a point in their journeys where they are ready to participate in an initiative or event, they take the opportunity to do so. It is the best way to move our shared cause forward to broader acceptance, treatments, and eventually, a cure.”

Find information for parents and caregivers to help you and your loved one. Additional tools and resources can help you manage and teach others about epilepsy.