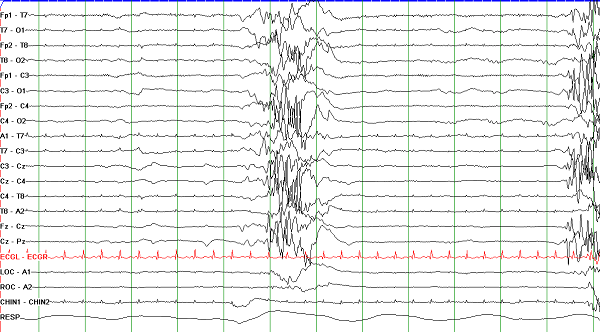 An EEG (electroencephalogram) in Ohtahara syndrome is very abnormal with a burst suppression pattern (high amplitude spikes followed by little brain activity or flattening of the brain waves).

What types of seizures are seen in Ohtahara syndrome?

Many seizure types may occur, but tonic seizures (stiffening of the arms or legs) are seen most often.

Most cases of Ohtahara syndrome are due to brain malformation or certain gene mutations. Metabolic causes are less likely. In some cases, no clear cause is found.

Brain malformations may be diffuse (affecting both sides of the brain) or focal (affecting only one area or side).

Gene mutations refer to changes in a gene or group of genes that may affect how the gene affects brain development or function. Some genes that have been associated with Ohtahara syndrome include

How is Ohtahara syndrome diagnosed?

Diagnosing a baby with Ohtahara syndrome is based on clinical features (what signs or symptoms the baby has) and EEG (electroencephalogram) findings.

The EEG is the most important test in making a diagnosis of Ohtahara syndrome.

An MRI (magnetic resonance imaging) scan is required to look for structural changes in the brain that could cause Ohtahara syndrome. If the MRI is initially normal, follow up MRIs can show atrophy (shrinkage) of the brain.

Genetic testing with chromosomal microarray followed by an epilepsy gene panel or whole exome sequencing should be done if no cause is found on MRI.

Blood and urine tests to evaluate for metabolic disorders should also be considered.

How is Ohtahara syndrome treated?

Ketogenic diet may be considered if seizures are drug resistant and the child is not a candidate for epilepsy surgery.

When a child is in the early preschool years, a vagus nerve stimulator (VNS) could be considered.

Sometimes a metabolic disorder that affects how the brain works may lead to Ohtahara syndrome. While these currently can’t be reversed, sometimes treating the underlying disorder can help.

What is the outlook for people with Ohtahara syndrome?

Children who are candidates for epilepsy surgery should be considered for that procedure early, as this may lead to improved developmental outcome.

The Rare Epilepsy Network (REN) helps connect families with research in these areas.