Is There a Right Way to Do the Diet? The Consensus Statement is Published!

Just last month, a significant moment in the history of the ketogenic diet occurred. The journal Epilepsia published the 14-page article, "Optimal clinical management of children receiving the ketogenic diet: recommendations of the International Ketogenic Diet Study Group." This work represents about 2 years of literature review, discussion, emails, and writing by 26 neurologists and dietitians that are experts in the use of the ketogenic diet. Not meant to be a firm guideline, this “consensus statement” was designed to give recommendations based on best evidence, but experience when that was not available. This statement was endorsed by the Child Neurology Society prior to publication.

How was it created?

At the 2006 meeting of the American Epilepsy Society, Jim Abrahams, the founder of the Charlie Foundation, gathered the scientific advisory board of this organization together in a breakfast meeting. He believed that a “blueprint” of how to best provide the diet, and to which children, would help prevent mistakes for those just starting ketogenic diet centers. Many of the neurologists and dietitians present also felt it would help guide multicenter research studies if a “standard” diet regimen existed. Beth Zupec-Kania RD from the Charlie Foundation and I were selected to coordinate the writing of this document. Twenty-six ketogenic diet experts were selected based on having at least one peer-reviewed publication related to the ketogenic diet in the literature, and established expertise. Eight-five articles were referenced in the paper in total. 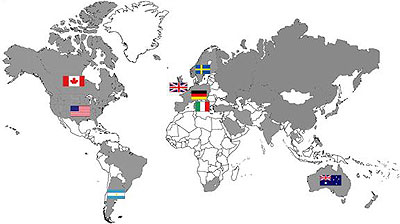 Countries Involved in the Consensus Statement

Authors of the Consensus statement (Those highlighted in yellow are dietitians.)

What does it say?

During the writing of this manuscript, most of the writers agreed on the results. These areas of strong consensus included indications and contraindications, how many drugs to try first (average of 2), how long to give the diet before stopping if ineffective (average of 3 months), follow-up labs to obtain, and how often to see children in follow-up (every 3 months for most children, every 1 month for infants).

Similarly, there was flexibility on many issues. These included which ketogenic diet to use (all were believed to be acceptable and were used), the starting ratio, calories and fluids, what dietary modifications to make during its ongoing use, and supplementation (other than vitamins and calcium).

Interestingly, there were some topics that were not universally agreed upon. In order to better demonstrate this controversy, a survey was sent to all members during the writing of the consensus statement to ask opinions about some of these issues. Here are several and the results:

In conclusion, this publication is a big step forward for the ketogenic diet. It has received attention already since it was published last month, including two editorials by prominent child neurologists. I believe all ketogenic diet neurologists and dietitians should routinely refer to this information, but also make it available to families to show that there is science behind ketogenic diet recommendations. The Charlie Foundation Scientific Advisory Board and I plan to repeat this in 5-10 years to update our recommendations, but also to re-survey the group and see if opinion on some of the controversial topics has changed.