Siblings and the Ketogenic Diet

The ketogenic diet is tough on children about to start it. They have to give up some of their favorite foods and eat in a different way than ever before. In addition, starting the ketogenic diet can be tough on parents. We commented on this in the June 2007 issue of Keto News, written by Emma Williams.

What about brothers and sisters? They are often not discussed and sometimes feel left out. It’s tough on them, too. I’ve had discussions with both Jim Abrahams of The Charlie Foundation and Emma Williams of Matthew’s Friends about siblings and the ketogenic diet and this month’s issue of Keto News focuses on how siblings react to the diet. The first section is written by Jim Abrahams about his family and their response to the diet when Charlie started it. The second and third sections were written by two teenage girls from England, remembering what it was like when their brothers started the diet. The final section is from a girl named Lexi from Ohio about her brother who has been on the modified Atkins diet nearly 2 years.

"Several years ago I worked on a movie called, 'First do no harm,' a recounting of one family’s struggle with epilepsy in 1975, and their battle to find the ketogenic diet which cured their youngest son. My greatest surprise came when I showed the finished movie to the family. I think they thought the movie was faithful, but they, primarily the siblings of the boy who had been sick, were overwhelmingly grateful, again not so much for the movie--but for the opportunity to revisit the scarred over but unresolved, complicated feelings, and address resentments, anger, frustration, confusion, and, most of all, guilt that had been festering in them for almost thirty years.

It is understandable, probably inevitable, that the sister or brother of a sick child would feel any number of negative emotions toward his or her sibling—and then blanket them with guilt because they understand it’s not the sick kid’s fault. My son Charlie had epilepsy. His older brother and sister were six and seven years old when he started having seizures. They both remember their safe little worlds being flipped on end, the strain on the family, the embarrassment when a friend saw a seizure, the constant tension, the loss of attention, the cancellation of plans, the fear of death. But mostly they remember the guilt they felt for being upset with their sick little brother who had changed their lives so dramatically--through no fault of his own. Joseph, Charlie’s older brother, has a distinct recollection of Nancy and me balling him out because he and a friend ate a loaf of bread in front of Charlie when he was on the ketogenic diet. How could Joseph’s young mind process this over-the-top parental behavior without feeling some resentment toward his helpless baby brother, and then, of course, the guilt?

I’ve had the opportunity to talk with many siblings of kids with epilepsy over the years, and it’s incredibly difficult for them to go there. But when I share my kids’ experience, it’s clear they relate. I strongly suspect that like the family in “First do no harm” as well as my own, somewhere, deep inside, these feelings are the rule. It is daunting enough to try and control the disease, but we really haven’t done the job if we are insensitive to the collateral emotional casualties in the family."

From a teenage girl (Matthew’s sister, aged 12) in England:

"My brother Matthew was introduced to the ketogenic diet when he was 8 and it changed our lives forever. Before the diet it was a nightmare, Matthew would bite and scratch, he would also scream and shout most of the day, and if he wasn’t screaming he was either watching Teletubbies or having seizures. I couldn’t bring friends back to my house for the fear that he would hurt them. The pressure and the stress didn’t help my parents’ marriage very much, in the end they split up which I was very sad about.

But when Matthew went on the diet everything got better. Matthew stopped the shouting and screaming, his seizures were cut down by a huge amount and he wouldn’t bite or scratch anymore. Unfortunately he still had a fixation with Teletubbies but I managed to live with that! I can also bring my friends back to my house knowing that Matthew wouldn’t do anything to hurt them, for which I am very happy about." 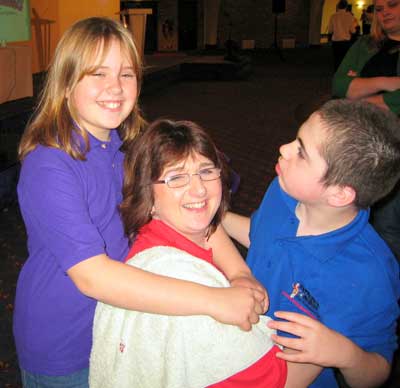 From another teenage girl in England (age 14):

"Being a sibling of a child on the ketogenic diet can get a little odd at times especially when we are in a restaurant and my Mum and Dad start weighing out food, it is very embarrassing! I sometimes get annoyed when my Mum is always in the kitchen cooking snacks and other things, and then if I want to cook cakes or something Mum wants me to help make keto snacks but I want to eat normal snacks! I don’t like my brother making me feel guilty when I do eat chocolate or sweets because I feel mean sometimes when I do eat them.

It isn’t all bad though. My brother is better behaved and he has lost all the weight he put on when he was on steroids. He is a lot happier and healthier and even though it can be annoying at times, I would much rather have a brother who is happy and healthy than overweight and aggressive."

From a girl from Columbus, Ohio (currently 8 years old):

My brother, Taylor, has been on the diet since July 1, 2006. He has been seizure free since December 16, 2006. This is definitely the very happy part about it. As part of the family it has allowed me to learn about different foods and how to stay healthy. It allows me to talk with people and explain the diet and how they can stay healthy too.

At first the diet was scary. It has changed my life a little because I can not eat the same foods I use to or go everywhere like I use to go, such as Chucky Cheese Pizza. I love Taylor very much so I am okay with the diet and its rules. It is amazing how much it has improved him. I think it ROCKS! It is the best diet ever. I fully believe that God has done his work. I really believe He has healed Taylor because he can do anything."