Raising Awareness About Epilepsy and Self-Advocacy 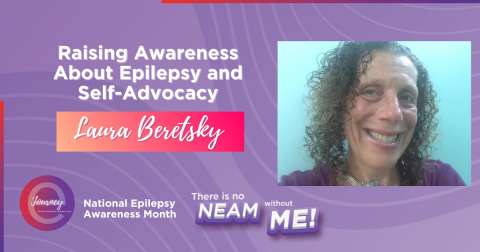 I was diagnosed with epilepsy at age six and had refractory complex partial seizures for decades. After trying 17 different medications, I finally agreed to my neurologist’s terrifying suggestion of elective brain surgery at age 47. I was a parent to seven and five-year-old children and had approximately seven seizures per month. Risks to their well-being and Sudden Unexpected Death due to Epilepsy (SUDEP) gave me the courage for the surgery.

On April 29, 2014, I had a right temporal lobectomy. The neurosurgeon removed the kiwi-sized seizure-triggering portion of my brain. Although the operation led to some life-threatening complications and a subsequent second brain surgery, it was ultimately successful. I’ve been seizure-free for almost seven years. The surgeries were worth the difficult journey.

Managing my seizures and post-surgery recoveries taught me so much about ensuring we get the best care possible from our doctors. Try to get a neurologist who is also an epileptologist, as that person will have the most in-depth information about your condition. This is critical for epilepsy patients, especially those with refractory seizures. Never go to your appointment empty-handed. Bring a list of questions about your epilepsy symptoms and information about your seizure patterns, triggers, and medication side effects. Sharing that information with your neurologist will help them make the most informed decisions about your medical care.

Managing others’ reactions to my seizures for decades also taught me a lot. Having and witnessing seizures are both scary. I worked full-time as a grant writer until I had children. In my experience, my colleagues’ fears sometimes led to inappropriate, discriminatory responses. I lost out on multiple job opportunities due to my epilepsy; unfortunately, this is not uncommon. I relied on the Americans with Disabilities Act to fight the most glaring discrimination situation, and although this was a grueling experience, I was successful.

I consider myself an Epilepsy Warrior. Now that I no longer have seizures, I have made it a personal goal to raise awareness about epilepsy and patient self-advocacy. I have a website where I try to blog about issues relevant to those who have epilepsy. I have written a memoir outlining my journey, and my goal is to have it published during National Epilepsy Awareness Month in 2023. I hope that people with epilepsy – and their caregivers and friends - find my story informative and helpful.