Pursuing My Dreams Despite My Diagnosis 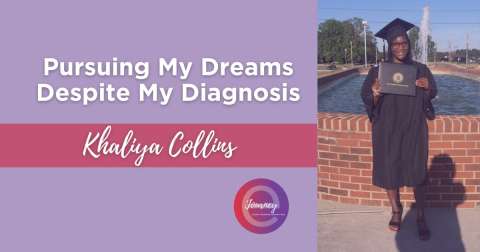 I was a toddler when I was diagnosed with epilepsy. I didn't know what epilepsy was until my neurologist later told me it was seizures. I was also told I wasn't going to be able to drive unless I was seizure-free for a year.

The sad part about it was that I would not be seizure-free unless I had surgery due to the scar tissue on the left side of my brain where the seizures come from. The doctor said epilepsy could affect my daily life. Once I found that out, my entire world flipped upside down. I did not know how to cope with all of it. I did not want to accept that I was any different from anyone else.

It is still hard to adjust to no longer being able to drive, work, or deal with the side effects of medications. Not to mention the embarrassment at school from the looks of pity people gave me. I was bullied by fellow classmates when I would have seizures at school.

Seeing people's opinion of me change, when all I wanted was to feel normal, was hurtful, but it became a part of me. I fell into extreme depression and sadness thinking my life would not be the same as normal people's.

It took a while to feel like myself again. It was hard to not be able to go to a university, parties, or drink alcohol, which led me to go to a community college. Now I am 25 years old with a college certificate in early childhood education.

I did hit rock bottom, but it is getting a little better every day. I want to give other people with epilepsy hope that it will get better for them too, even if it does not seem like it is right now. I want to write my own book and do a podcast about my life with epilepsy in hopes of educating people who do not understand it and relating to people like me who have lived through it.

Everything is not completely back to normal for me, and I am still learning how to cope with this life I am living. I believe you will too. It takes time to learn to live with epilepsy, so surround yourself with people who love you.