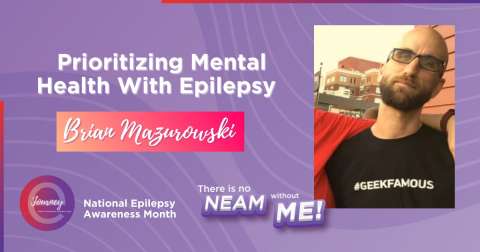 For as long as I can recall, I was experiencing what I described as "dizzy spells." As many people who have experienced absence seizures know, they're almost impossible to articulate into words, making them difficult to diagnose as it appears people are just "spacing out." We didn't catch them until I was 16 when I went to the doctor for a sports physical for high school wrestling. I could describe the nearly indescribable sense of panic and that overwhelming feeling of Déjà vu, which captured the doctor's attention. Around the same time, those absence seizures became much more recognizable tonic-clonic seizures.

We spent the next few years making trips to the neurologists for EEGs, MRIs, and more tests while trying to maintain a sense of normalcy using medications. However, as many people with seizures know, medications don't always work, and even if they do, they may lose effectiveness over time. One pill a day can quickly turn into two or three pills every few hours. I was around 17 years old, so my priorities were those of most teenagers. I wanted to be able to do and experience the things the people around me were, like driving a car and not having to approach everything with the apprehension that I could have a seizure.

Now that I am 37 years old, I see that I handled it poorly. I, and my doctors, never really made emotional health and well-being a priority. Due to that, I just buried everything and convinced myself I was doing great. I never once cried during the whole diagnosis, the decision to have brain surgery, or any other part. I thought I was being strong and doing the right thing. So, I did what I think many people do and buried it inside. I isolated myself.

Throughout college and a lot of my adult life, I've struggled with anxiety and mental wellness in general. Epilepsy impacted my mental health, and my mental health impacted my epilepsy. I put the emotions from my brain surgery, seizures, and everything behind me, or so I thought, but they didn't really go away. After a decade, I experienced a seizure in my senior year of college, went through the drills, and eventually returned to some level of normalcy again. However, after about two years or so, I found myself back at square one. I had another seizure and immediately found my mind wandering back to that familiar place.

I took this opportunity to advocate for other people with epilepsy and to tell my story. I want people to know, particularly young people, that if you are experiencing dread, unfamiliarity, and sadness, allow yourself to feel these emotions so you can heal. Being vulnerable is not the same thing as being weak.

So many people living with epilepsy or seizures experience isolation and shame that it is not deserved. Be strong, be loud, and be vulnerable. We need to advocate for ourselves and one another. We need to share our experiences. If you are suffering in silence – don't. We are here to support one another, be proud of our journeys, and allow ourselves to heal!