Nina's Story: Best of Both Worlds 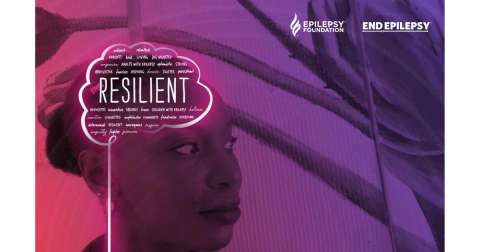 Nina Mago lives in Uganda and runs the Purple Bench Initiative - Uganda. In 2019, she represented the entire continent of Africa at the 33rd International Epilepsy Congress in Bangkok, Thailand, as a Golden Light Award winner. Learn about her remarkable story of speaking up for people living with epilepsy.

Epilepsy took me by the hand at the age of 3. While I don't remember much about my early days, I do know that I spoke early and brought lots of joy to my family. As I grew up, I learned that extreme emotions were a trigger for my seizures.

When I was about six years old, my parents moved to Moscow, Russia, from Uganda where I received part of my early education. By that age, I had already experienced seizures. When I saw a neurologist in Russia, I finally had the diagnosis confirmed: I had epilepsy.

For seven years, I was constantly monitored, and, although I was on medication, the seizures kept on occurring. Some days were without seizures; while some were rough. I spent days in the safety and comfort of my teacher's arms, rocking back and forth, while she taught the rest of the class and occasionally felt for movement when I came around out of the seizure.

From the Ugandan perspective, the story was very different. At the age of 12, I lived a nightmare as an individual with epilepsy. I did not have the support system I was used to in Russia. Epilepsy, known as ensimbu in my local language, sends shockwaves through communities at the mere mention of the word. The myths and misconceptions only fueled what was an already difficult, fragile situation.

I battled with exclusion and betrayal by my society.

I would wake up on a dusty floor, wounded and disorientated, while children made a spectacle of me through the window.

Not being able to run to someone older for safety and not waking up in the comfort of my teacher marked the beginning of a very scary new world, one that I was not ready for at the time, because of my failure to cope. I was constantly bullied and always made fun of, always! The terror of exposure keeps one burdened by secrecy. It brings you face to face with loneliness, discrimination, and stigmatization, and drowns you in depression.

I lived in constant fear of being alone because I lost friends faster than I could make them. Seizures just seem to wait for a great crowd before pulling off an amazing show. I became angry and emotionally strained with no way out. But within my family I had support and it was my safe space. Unlike the school environment where I was "the possessed girl," back home I was simply Nina and that created a sense of belonging.

While my family did everything they could to support me, I still had a void that could only be filled by others who fought the same battle. It was never easy to explain feelings of anxiety, the side effects of medication, or why I was happy at one moment and not another.

Telling my story, hard as it was in the beginning, set me free from the years of what felt like living a lie.

Epilepsy is a condition of the brain causing seizures.

Throughout my life's journey, I constantly searched for a person who had the same battle scars and who could share experiences with me. I decided to be the rock I had desperately prayed for. I chose to be the source of strength and hope that I needed then, and many need now, to make it through.

I founded the Purple Bench Initiative (PBI)-Uganda, making myself that figure of hope, especially for young people living with epilepsy. Through the PBI, we create awareness to empower people with epilepsy and their caregivers. So far, I am reaching out to primary schools to demystify epilepsy; equipping teachers with knowledge and skills to help students who have epilepsy; addressing students of nursing schools to empower them with practical skills; participating in TV and radio discussions; and addressing Rotary Clubs in Kampala and Masaka.

Speaking out also earned me the Golden Light Award for Africa and wonderful friends. Hearing all the stories was a great inspiration and I was immediately drawn to finding out more about the other awardees. It was astonishing that we came from different continents, backgrounds and cultures, but the stories told the same tales of resilience, empathy, and triumph.

I continue to foster change that will nurture the social acceptance of epilepsy in communities and empower those affected. I work to create a firm foundation in society that supports fundamental human rights and equal opportunities for everyone with epilepsy so they can live a dignified and highly impactful life. I am determined to change the face of epilepsy by telling my story and give others the confidence and platform to tell their own.