My Journey of Self-Discovery 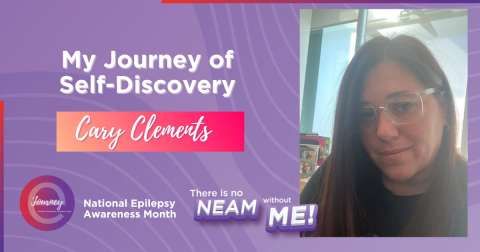 Over the past year, I have spent time reflecting on my journey through self-discovery as a person with epilepsy. Since the beginning, my story has had a lot of ups, downs, zigs, and zags to get me to where I am today.

I was diagnosed with epilepsy in December of 1994 as a senior in high school. I was already one of the unpopular kids in school and was picked on a lot so adding in epilepsy was disastrous. I don't discount that this was also scary for my family to adjust to because we didn't know what the road looked like for me.

I remember feeling angry at the world. I couldn't be more thankful for the support that my family provided and my best friend, Sandy. They never treated me like I was different, but I was different. The problem with something like this is you can't just treat the symptoms; you have to treat the issue. For me, that was the mental health component because I was letting epilepsy victimize me.

As years went by, I got married, inevitably having seizures along the way, and my husband was always supportive. I am grateful that I was never made to feel less than I was. Still, we couldn't do the normal things young couples did. I always had to make sure my medicine was with me. I had to get the right amount of sleep, eat right, and avoid alcohol. I couldn't enjoy being in my 20s. Eventually, I became pregnant with my daughter Madison, which was scary because birth defects or miscarriages were very possible, along with the potential of increased seizures as my pregnancy advanced. However, through all the worry and scares, Maddie was perfectly healthy.

For other reasons, my marriage ended in 2005 when Maddie was four years old. My biggest concern was living alone with her and how to handle epilepsy as a single mom. It consumed me. I had several seizures throughout Maddie's early years. I remember one in particular. I was home and not feeling well. My mom was there too. Madison asked if I would get a cookie from the cookie jar. That was the last thing I remembered until I came around minutes later. Maddie was crying and said, "you broke the cookie jar." I had to comfort my child while my anger at being a person with epilepsy simmered. Every time I thought about it, I became angry. I just wanted to be normal.

I was mad at God for years for making me this way and for making my daughter go through it too. Maddie's entire childhood, from kindergarten to high school, was marked by my seizures in some way. Maddie worried all the time. Plans were canceled because I didn't feel well enough to drive somewhere.

Maddie has a heart of gold, so she always understood. By 8th grade, she knew how to handle my seizures and knew what my "aura" was like right before a seizure. In high school, plans changed frequently, or Maddie would offer to stay home. I still feel guilty about how much she gave up being with me. Madison has always been my biggest champion, and I am truly blessed to have such a kind soul in my life.

I was hospitalized during Madison's junior year of high school and finally met a doctor who took the time to listen to my fears and concerns. I have had one seizure in the five years he has been my doctor. I have been officially seizure free for four years and five months!

I have chosen not to fear my disease and all the power the seizures have. It no longer makes me feel weak. I feel powerful now. I am an Epilepsy Warrior.