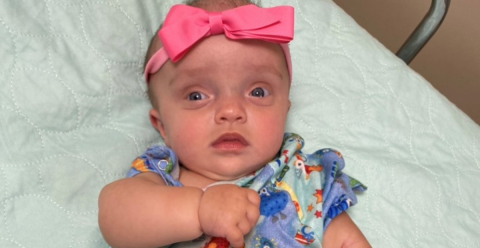 A rare diagnosis is one of the most terrifying things a parent can hear about their child. One may feel helpless, isolated, and confused. Our baby girl, Hailey, was diagnosed with Jordan’s Syndrome (ppp2r5d) at eight months old, and I felt each and every one of those emotions.

So many questions that we had about her development had concrete answers. Her low tone, delayed babble, struggles with fine motor skills, difficulty at birth, and overall global developmental delay, finally made sense. We were fortunate to have an answer that many families in the Jordan’s Syndrome community waited for, for several years.

When Hailey was a newborn, I watched her every move, studied every inch of her body, all while trying to put the pieces together of a complex puzzle.

At around two months old, her arms and legs were moving rhythmically. A video was immediately sent to my father, a brilliant and seasoned neurologist, and one of our dear friends, a gifted and compassionate pediatric nurse practitioner. We were directed to her pediatrician for guidance. The doctor said she was experiencing myoclonic jerks of infancy due to her prematurity and underdeveloped nervous system and they would most likely go away.

I watched her like a hawk, and as we were advised, they stopped.

I felt so lucky that we were not observing seizure activity as she continued to grow. Seizures are often associated with ppp2r5d. In fact, about 40 percent of the Jordan Syndrome population experiences seizures at least once, or recurring.

I thought, maybe we could escape one of the characteristics associated with her syndrome. I put it in the back of my mind until a few days shy of her first birthday. I had taken Hailey for a walk, when we stopped so that she could drink her bottle. I noticed her head was dropping, again, in a rhythmic manner. I panicked inside, but one would never know as they passed me on the bench. I sat there, calm and poised. I was hopeful that she was exploring new movements and that was all.

The neurologist had us come in for an EEG. I sat there with her head wrapped up, wires attached, and felt her relax as she was nestled upon me. The technician warned me that there would be flashing lights to see how Hailey would react.

She started jolting her head and body in response to the lights and at that moment, it was evident that she was, in fact, experiencing seizures.

A few hours later, a phone call confirmed that she had been suffering Atonic/Myoclonic seizures and would promptly be treated with Keppra.

She is now 15 months and so far, her seizures are under control.

No parent wants to see their child experience discomfort, pain, or anything other than pure bliss. With the help of our family, science, and advancements in the medical world, we hope to see a paved future for our baby girl that offers nothing but true happiness.