The Ketogenic Diet in a Bottle?

Most parents and neurologists consider the ketogenic diet as only including heavy whipping cream, mayonnaise, butter, and oils. For most children receiving this therapy, they are correct. In order to create a solid food diet in which 90% of the calories are fat, these foods make up a large portion of the child’s usual intake. However, the ketogenic diet can alternatively be easily provided as a liquid-only formulation to both infants as well as children with gastrostomy tubes. To some parents this is a surprise, but many ketogenic diet experts have been utilizing these formulas for years with good results.

What are these formulas?

There are several ways to provide the ketogenic diet as a formula. Perhaps the most simple is to use Nutricia KetoCal™, which is available in a powdered mix and either a 3:1 or 4:1 ratio. Water is added and calories are calculated by a dietitian. The 4:1 KetoCal has a slight vanilla flavor; the 3:1 KetoCal is unflavored. These formulas are milk-based, include corn syrup solids, and are nutritionally complete.

For children in whom separate components (e.g. fat, carbohydrate, and protein) are desired, or who have a lactose intolerance, “modular” ketogenic diets can be created using Ross Carbohydrate Free™ (Abbott Nutrition), Microlipid™ (Nestle Nutrition), and Polycose™ (Abbott Nutrition). A product in South Korea is also in clinical use called Ketonia™ has also been studied and is in active use, specifically for infantile spasms. A revised formulation called Ketonia II™ is now available without MCT (medium chain triglyceride) oil included. Lastly, Accera Pharmaceuticals, Inc. has developed a powdered MCT (medium chain triglyceride) oil-based powder (40 grams) that is designed to provide oral ketones to adults with Alzheimer’s disease. It is clinically available, includes both milk and soy protein, and is called Axona™. 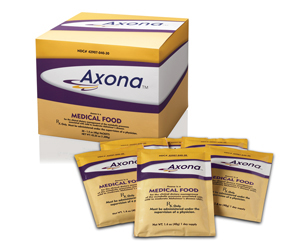 How well do they work?

Why do children receiving an all-liquid ketogenic diet do so well? The answer is not clear. Part of the success may be due to the perfect compliance, with ketosis assured and cheating nearly impossible. However, the reason for the doubling of seizure control is likely clearly more complicated than that, and may have to do with fatty acid composition of these formulas or other factors.

Are there other advantages?

The future of ketogenic formulas

Although predominantly used in 2009 for infants and children with gastrostomy tubes with intractable epilepsy receiving the ketogenic diet, these formulas may have other uses in the future. There is an ongoing study at our institution to see if the modified Atkins diet with supplemental KetoCal™ shakes (10 ounces daily) for the first month is more likely to result in seizure control than the modified Atkins diet alone. In this study, the ketogenic formula is used in addition to solid foods, rather than as the entire diet. Ketogenic shakes (e.g. Axona™ and KetoCal™) are being used clinically and in research for non-epilepsy indications such as Alzheimer’s disease and ALS (Lou Gehrig’s Disease) respectively. Information about non-epilepsy indications for the ketogenic diet was discussed in the August 2008 edition of KetoNews.

One of our modified Atkins diet study patients and her daily KetoCal™ shakes.

Nutricia is also investigating new ways in which to make KetoCal™ more accessible for children receiving it. One option may be ready-made liquids that children can bring to school such as in cardboard juice-pack styles. These will be available for sale in November 2009 according to the company. Another method to provide the benefits of KetoCal™ might be to use the powder as a flour substitute in recipes. Some of these already exist and are in clinical use, such as at www.myketocal.com.