How Epilepsy Impacted Me 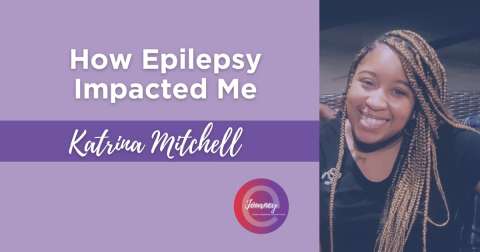 I didn't have epilepsy as a child. It all started with migraine headaches when I was older. The big lights above my desk at the bank would flicker, and I would get a headache and feel cold. At first, it felt like my blood sugar level was dropping, but I eat correctly, and I am active, so that didn’t make sense.

In March 2020, I was working out and my sister had taken our kids to practice. I was driving to meet her after my workout. We were on the phone when I passed out. My sister heard the car accident on the phone. I went across two bridges and through a fast-food drive-in before stopping when I hit two parked cars in a different parking lot.

After the accident, I woke up in the emergency room. I had an excruciating headache. The doctor said I needed almost two pints of blood. Thankfully no one else was hurt, and I’m still here to tell the story. Afterward, I went to see a neurologist, and I told him everything and we began testing. The EEG was abnormal but did not show exactly what was going on.

Seven months went by when I had a busy day at work. I went to the restroom, and I passed out. I woke up with my colleagues and our VP standing in front of me. The next day my neurologist told me that I could not drive for six months. I had more tests done, and this time, the EEG picked up things he wanted to see. I was diagnosed with frontal lobe seizures which were causing headaches and me to pass out.

The doctor told me my brain is overloaded. I had been doing too much. I needed to reduce stress in my life, and a lot of what I had said “yes” to really needed to be a “no.” I told my doctor I didn't want to be a patient forever. I wanted to be me! I wanted a treatment that could help me, but not change who I was. Within six months of beginning medication, my blood level was much better.

I am taking medication twice a day. My visits with my neurologist have been reduced, but he still calls regularly to check up on me. My family is a big support as well as educational resources I have found.

You never know who is impacted by epilepsy. One day at church, a lady spoke to me because her son has seizures. Then my pastor said his son, who is in college, also has epilepsy. I told them to get the Epsy App and connect with the Epilepsy Foundation as the app helps you remember to take your medication and the Epilepsy Foundation has a lot of helpful articles to share.