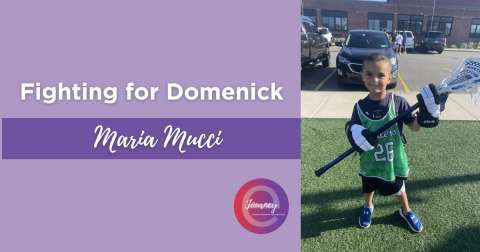 When Domenick was four years old, he started having these “episodes” where he would be running around playing and laughing and then would stop dead in his tracks, get very pale, and become withdrawn. He would vomit and then usually go into a deep sleep. On our first trip to the hospital, I was told it was vasovagal syncope. The episodes continued over a span of two years.

The fourth “episode” happened to Domenick when he was in school in October. I picked him up, and by the time I got him home, I couldn’t get a response out of him, so we went back to the hospital. The doctors said it could be many possible things like a cardiology problem, heart disease, mitochondrial disorder, or epilepsy.

Domenick has been through it all since then. He has been poked and prodded so many times and had countless tests, including tests for COVID-19, EKGs, EEGs, MRIs, stress, and genetic tests. Everything came back normal, which we were so grateful for, but we felt dismissed by neurologists telling us it was migraines or behavioral issues.

During the last hospital visit, he had an episode and didn’t wake up for a couple of hours, which was the longest time he had ever been out of it. His lips were pursed, eyes closed, and he had involuntary movements. I knew something was happening to my son and no one was listening to me.

With the support and help from my family, my friends, my church, and a lot of my clients, I was able to persevere and fight for my son. With the help of his teacher, we worked together and logged everything, and recorded him. I did a lot of research and shared it with my own doctor.

I waited for an opening with a doctor, which was in June – and it was only March. I was told she was the best person to help, so I decided to wait for an appointment. I relied on God and my faith that a door would be opened sooner, and it was. On April 28, 2022, my son was diagnosed with epilepsy.

We were brought to our knees, but we had a tribe behind us, shoulders to cry on, prayer, and amazing people in our lives to help us through. It takes a village and the gratitude I have for mine I can’t put into words.

Domenick had seizures for two years and no one could help him. Don’t stop fighting, you know your children best!