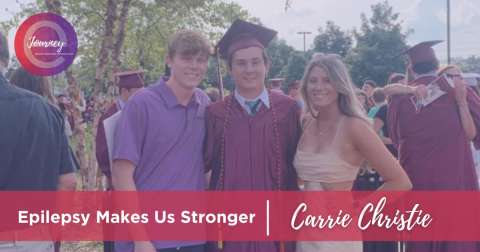 My name is Carrie. I am a 23-year-old living with epilepsy. I had my first seizure on November 16, 2015, when I was 16 years old. I came home from school one day, took a nap, and the next thing I knew, I was in the back of an ambulance. I had no prior seizures before this incident. It was unexplained, and it came out of nowhere. I was referred to a neurologist at a children's hospital, and I remember meeting her for the first time to get an EEG done.

The results revealed some abnormal brain activity but nothing too noteworthy. I had an overnight EEG since my seizure happened while I was sleeping. Two weeks after the second EEG on January 6, 2016, I had a second seizure while showering at home. I was rushed to the hospital again. I started taking anti-seizure medication. Now, I am almost seven years seizure-free.

My family has a history of seizures too. My brother Cameron had a tonic-clonic seizure when he was 17 years old as we were getting ready to go outside to watch the 4th of July fireworks. He was rushed to the hospital and saw the same neurologist I did. Cameron was diagnosed with epilepsy, too, and was put on the same medication as me.

My youngest brother, Andrew, was 18 years old when he had a seizure driving home from a graduation party. He crashed into a telephone pole and was hospitalized for a few days. An EEG showed abnormal brain activity, and saw the same neurologist as Cameron and me. He was put on a low dose of medication as a precaution. After Andrew had a second seizure at home, he was diagnosed with epilepsy, too, and his medication was increased.

We have had our ups and downs with epilepsy. However, what can be viewed as a negative or scary thing is now something my brothers and I share. We know what it is like to live each day with a slight worry in the back of your mind.

We are looking into genetic testing since my parents have a potential genetic link. My dad's mom suffered seizures from her late teens into adulthood, and my mom's grandfather was discharged from the military due to a seizure disorder.