Epilepsy is Hard, but You’re Not Alone in the Journey 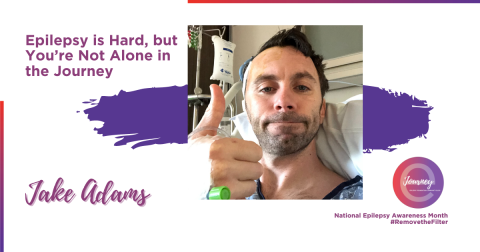 I grew up playing sports and living a very active lifestyle. I felt invincible through college - go Bears! - and into the start of my professional career. I was thrown into a complete tailspin when I collapsed at work at the age of 27 and woke up in an ambulance. Apparently, I had a benign mass in the right temporal lobe of my brain that caused a seizure. I was immediately put on medication and told that I would need to limit my physical activity and reduce stress, which meant I needed to chill out with my career.

However, being stubborn and ignorant, I rejected the thought that I had epilepsy. I didn’t bother researching epilepsy to better understand my diagnosis. Instead, I had tunnel vision set on surgery to help me get back to my normal life.

Six months following my seizure, I underwent a procedure to remove a cavernous hemangioma. I considered the whole thing a brief blip in my life and returned to work and my 20-something lifestyle two weeks later. Like many people my age, I wasn’t exactly living a lifestyle to help prevent seizures, and I felt like I was invincible. I stopped my medication the following year, and two years later, I married my wife.

A year into our marriage - and five years seizure-free - I was on the phone with her while driving when she heard a weird rustling before the call disconnected. About a minute later, I called her back while stopped in a grass field and let her know I had a seizure. I had crossed two lanes of traffic going the opposite direction, jumped a sidewalk less than 30 feet from a pedestrian, and came to a stop in the field where I found myself. I had never been so rattled in my life.

Reality came crashing down for my wife and me; epilepsy was a part of our life. For five years, we approached seizure control through medication, but each time, another focal seizure breakthrough would occur.

Epilepsy created challenges that I had to overcome. I commuted from Santa Barbara, Calif. to the University of California, Los Angeles for my master’s in business administration and had one year left until graduation when I had the seizure. Since I could no longer drive, I had to take a two-hour train ride to Los Angeles and a bus ride back that arrived in Santa Barbara at 2 a.m. during the workweek.

Recently, my wonderful care team recommended that I pursue a second surgery. I am now one month removed from the surgery and healing well. I have been extremely fortunate with my recovery and remain hopeful that my seizures will be controlled. I am about 10 years wiser than when I had my previous surgery, so I know not to take it for granted.

If you have experienced epilepsy, don’t freeze yourself by constantly asking “why me?” As you go through this journey, pause occasionally, and be inspired by yourself —look at what you’ve accomplished so far!

No one does ask to deal with epilepsy, but once I started talking about it, I was surprised to learn how many people do. Although, it’s easier said than done, find someone else who is in the same position and be real with them about how hard it is. Networking with peers and learning about epilepsy are tools to help you make it through your journey.