Epilepsy Does Not Define Me 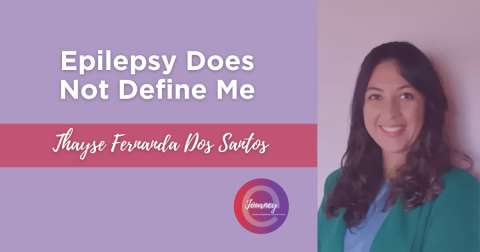 My name is Thayse, I am 30 years old, Brazilian, from Piauí, and a journalist.

I was diagnosed with refractory epilepsy as a teenager. It started as involuntary muscle contractions and slowly turned into epileptic seizures. After a visit to the health care facility and an electroencephalogram test, the diagnosis was confirmed by a neurologist.

I often catch myself thinking about the words of the neurologist, "You have epilepsy". At that moment, my mother and I felt alone and without information. It took me time to assimilate and understand the diagnosis. I didn't know how to deal with it all, nor did I want to accept that I was different from everyone else.

My epilepsy diagnosis scarred me. It was the first time I was forced to think about something that could affect my adolescence and the rest of my life.

I was living in the countryside of Piauí, a Brazilian state in the northeast region of the country, a small town with a lot of social prejudice.

At first, I asked my mother and family not to comment on my diagnosis to anyone. I was afraid that when I had told others, they would have pulled me away. I was afraid of having seizures at school because people weren't prepared to help me. I feared the unknown and was convinced that I would be seen as abnormal for the rest of my life. During high school and part of college, I experienced fear, insecurities, and shame about having a seizure in the classroom.

It took me years to accept that I had epilepsy. Today I understand the importance of saying that epilepsy does not define me. In mid-2017, I decided not to hide my diagnosis and found it necessary to create connections that would help me in this process. I’ve found support networks, a good neurologist and a new medication. These small - and necessary - changes have transformed my life. What was fear turned into fuel: I chose to embrace my epilepsy instead of hiding it.

I’ve created an Instagram account (@epilepsiacomafeto), held meetings with co-workers in hopes of educating people who don't understand it, as well as connected with people who have the same disease. I've found that the key to living a seizure-free life is to focus on what your doctor recommends and cut out the things that don't match your treatment, like drinking alcohol. While I can't control my epilepsy, I can control almost every other factor in my life: medication at the right time, sleep routine, and the mindset to live well with epilepsy. I'm still trying to overcome challenges like I've always done before and, of course, not forgetting the four daily medications.

Epilepsy is not the main actor in our lives, it is just a supporting role.