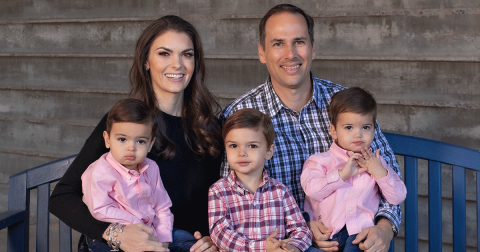 In early 2020 one of our twins, Travis, who we call T-Money or Money, was diagnosed with Dravet Syndrome, a rare childhood form of epilepsy. At the age of 7 months old Travis had his first seizure which lasted 18 minutes. Travis had a second seizure 30 days later; it was another tonic-clonic that lasted 70 minutes and required multiple doses of rescue medication before it stopped. Both seizures ended with hospital stays. Since diagnosis, Travis has been put on multiple daily medications to help stop and shorten the length of his seizures. He has had seizures as frequently as every day and has gone several weeks without them too.

Our biggest challenge has been adjusting to our new life which includes a daily medication schedule, remembering to take rescue medication with us if we leave the house, and training family and caregivers on a Seizure Action Plan. As a parent, it is heartbreaking watching your child endure multiple seizures and then struggle to be himself on so many medications.

At this time, doctors are unsure as to the effect the seizures will have on Travis’ life as he gets older. Travis turned 2 earlier this summer and is developing as a normal little boy who is achieving and even surpassing milestones in his age range. His physical, emotional, cognitive, and social skills have shown us no cause for concern. This keeps us optimistic and obviously makes us very proud as he reaches these stages and transforms into a toddler much like his twin brother Tyler.

We are blessed beyond words to have a local children’s hospital so close and thank God daily for putting us in the hands of a special and knowledgeable doctor, who is part of his medical team. There are so many things to learn about epilepsy and the Epilepsy Foundation has helped to get the word out about Tyler and his type of epilepsy. We want people to know that epilepsy is more common than people know, and it needs more funding for epilepsy research.