My Journey of Hope and Healing 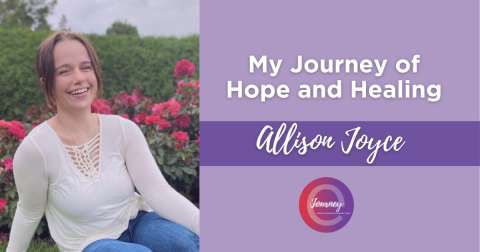 I have had epilepsy my whole life. It is something that I inherited. When I was seven years old, my parents told me I had my first seizure and had lost my memory. In second grade, I was diagnosed with absence seizures. There are chunks of my childhood that I do not remember. I was always at the doctor's office, but it often seemed like no one believed anything was wrong with me. I had seizures that looked like staring off into space in elementary school. Some of my teachers thought I was just daydreaming, which is what I thought it was too.

I was raised as a Jehovah's Witness, so I wasn't allowed to make friends, which was very hard for me. I didn't make a real friend until high school. I had a tonic-clonic seizure, and I thought my life was ending. My teacher helped me when no one else ever did. Her daughter had seizures as well. She would tell me it would be okay when I would break down in tears. Her words made me feel a lot better and kept me from suicide. Later in high school, I had tremors where I would lose control of my hands and ended up in the ER. None of the seizure medications I was taking were working for me.

The seizures continued after I graduated from high school. My aunt found an article on the vagal nerve stimulator. I had the surgery, which helped for a while, but the seizures returned when I moved out of my parent's house. Being on my own, I had to learn to deal with it. I couldn't just hide under the covers in shame. I realized it was something I could not control, and I should be proud of how I learned to deal with it.

Through it all, I continued to struggle mentally. I learned that having the right support team makes the biggest difference. My best friend, Ivy, and her mom encouraged me to be proud of who I am. Ivy has been with me through so many of my seizures. She always encourages me and reminds me that I am not weaker because of epilepsy – I am stronger. She also reminds me that despite everything I have been through, I have a smile.

After moving out and leaving the church, I soon met my boyfriend, Matt, who loves me even though I have epilepsy. Although I worried it would scare him away, his mom suffered from anxiety-induced seizures, so he always knows exactly what to do.

My seizures started getting worse to the point where I missed work. I eventually ended up in the hospital for a couple of days, where I was diagnosed with refractory epilepsy. My body rejects my medication. After that moment, I decided this was something I would get through just as I will anything life throws at me.

I am 22 years old now, and I thought it was time to share my story, so hopefully, I can encourage others to share their stories too. Some things that happen in life change you for the better, which is how I finally found the courage to share my story. I hope others who feel like their world is ending know they are not alone.

Epilepsy never stopped me from being a positive person or from being who I am. You can still pursue your dreams with epilepsy! I'm going back to school to be a teacher next fall to be a special education teacher. I want to spread the word about epilepsy and give hope to other people who are going through it.