Epilepsy Made Me Stronger 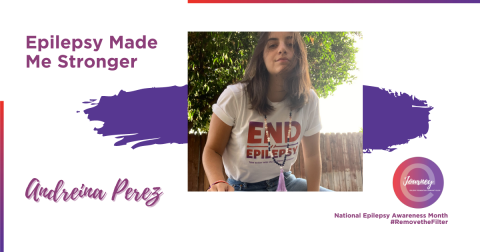 My name is Andreina Perez, and I am a 27-year-old Venezuelan living in Los Angeles working as a filmmaker. I was first diagnosed with epilepsy at the age of 14. After my fifth seizure, I spent four years without seizures, but then in 2015, I had another seizure.

When I was 13 years old, I was very depressed. My family was broken, and I was being bullied at school. I had no one to talk to and even my family would judge me. I felt lonely and took sleeping pills to end my life, but I woke up the day after. I was dazed, confused, and fainted. After that, I had my first seizure and I woke up three days later at the hospital.

Since then, living with epilepsy has brought on many challenges, especially with employment. I applied for a job in 2015 and while I passed the first interview, I had a seizure during the second one. I did not get the job. Months later, I had another interview at another company and had a seizure, so I did not get that job either. As a result, I started hiding my epilepsy.

Eventually, I realized talking about my epilepsy is important, so I began talking openly about it. Having a seizure is very emotional for me, and now, it is a reminder that I need to work on my inner obstacles, especially my stress at work.

Learning about my seizure triggers and how to address them has made me a stronger person, and now I work to share my story to hopefully help other people who are living with the challenges of epilepsy.