Epilepsy Helped Make Me What I Am 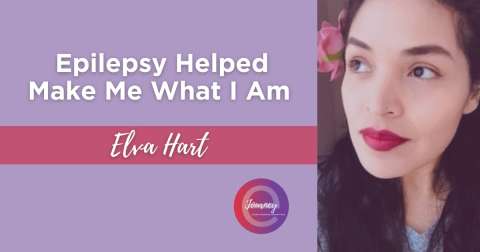 My story began when I was seven years old. I remember being at the top of our apartment steps and feeling like I was in a dream. My mother's voice was far away and sounded distorted. Everything seemed out of focus. She pulled me back saying, "Que haces!" or “What are you doing?” and then suddenly, I stepped back into reality and safety.

Still, nothing made sense to me. My head hurt and I felt drained and scared. These "zone out phases" continued to happen several times and caused me to walk into the streets and pace aimlessly in classrooms while other kids’ laughter filled me with shame. I would choke on my food while being asked, "What are you doing?"

I didn't know what I was doing, and I couldn't understand what was happening. Why was I broken and flawed? We soon discovered that I was having absence seizures. I was given medication and told I would most likely outgrow them.

Having grown up in a traditional Mexican household, my Spanish-speaking mother couldn't understand what seizures were or who to ask for help and support. We were naive to this world and just hoped it would go away before we even learned more. With my "spells" under control, we hardly talked about them anymore.

However, when I started high school, I found that tasks that needed focus, such as taking a test or solving certain equations, would cause the spells to return. Eventually, these spells progressed to full convulsions. I was heartbroken. I had dreams of being a police officer, traveling, going away to college, and driving a car. Yet, this new intruder called epilepsy would derail all my plans and crush my hopes and dreams.

I lost interest in school and became withdrawn and depressed, suffering in silence. I spent hours in my room; there was no point in going places and possibly exposing myself. I chose to hide. I decided to stay quiet. Everyone else did the same. This "intruder" was now invisible. A change and increase in medication would eventually calm my brain, even though it came with a price for me: fogginess, lethargy, and forgetfulness. I would minimize it by saying I was careless or quirky. It was easier that way.

Years passed, and I ended up quitting college. Instead, I found a job I enjoyed, assisting and caring for individuals with disabilities. I went a long period without seizures and even had my medication reduced. I was also thrilled to be able to drive. Life wasn't perfect, but epilepsy hadn't robbed me of everything.

I went on to fall in love, get married (even though I thought someone would find me unlovable), and have children. When my first son turned seven years old, I realized I was having a tough time. I was anxious and emotional, and I couldn't figure out why. It wasn't until I was watching him run around, so happy and free, that I realized that his life could change at any moment. His healthy brain could one day be invaded by that same intruder that now lurks in mine. I was horrified and worried for him and my other two children.

I realized that I had to stop letting myself be robbed of beautiful things. I decided to no longer hide or stay silent. Instead, I informed them and let them see that all disabilities are challenges but can also be blessings if they push you to make a difference.

I also decided I would return to school and focus on getting a degree that would give me the skills to help others not hide from their truth. It took me years and one seizure during a final, but I'm now on my way to earning a bachelor's degree in psychology. I couldn't be prouder.

Yes, there are moments when I sulk, cry, and throw myself a pity party, but there are also times when I look back at all that I have endured and how it made me what I am: strong, resilient, and caring. I'm slowly seeing my "intruder" more as an annoying guest who constantly reminds me that I am not always in control of circumstances, and that is one thing I do not mind.