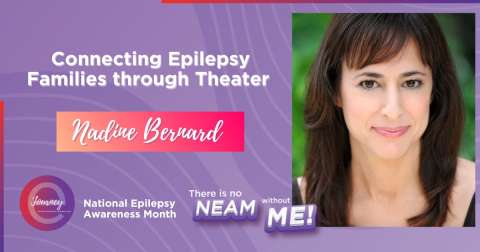 Our family has been affected by epilepsy since my son had his first atypical tonic-clonic seizure when he was 6 months old. He was eventually diagnosed with an SCN1A mutation. After many ER trips, a stay in the ICU due to an uncommon side effect of medication, and fighting for a drug that didn't yet have FDA approval, our family felt devastated and isolated on our journey. Neither my husband nor I have any family living close by. Our friends stopped knowing how to support us, and our world seemed to become smaller and smaller.

As a playwright and actor, I finally decided to channel my frustration with the medication and our situation into the best way I could express myself. I decided to write a play called "Seize the Day After" about parents who support their children with seizures and the obstacles they overcome.

Through theater, I hoped other people would know what it felt like to care for a child with epilepsy, and I hoped to connect families going through similar struggles. I wrote my first draft through a playwright's workshop at Luna Stage Theater in West Orange, New Jersey. I could see that the play was already making connections. By having actors read the script around the table, I met two other people whose lives were affected by seizures.

We went on to hold three readings of the play. One at a theater in New Jersey, one for the League of Professional Theatre Women in NYC, and one was an awareness-raising play at Cornerstone, Montclair, which supports inclusive activities and education in the local community. Through the performance at Cornerstone, I met several other families in my community affected by epilepsy. Once again, I found that speaking out about what was happening to my son helped create bridges and opportunities for dialogue.

If I hadn't written the play, I would never have met the other families in our town who were grappling with some of the same things we were. Kids Crew started up in New Jersey during the pandemic, and we met even more wonderful families who wanted to share stories and support each other.

My son, whose seizures are still frequent, has reached his teen years, and he is constantly asking me about new treatments and research, and the development of seizure predictors. I would do anything to be able to help him more, so I decided to use my play during National Epilepsy Awareness Month to raise money for the Epilepsy Foundation, which supports research into new treatments and technologies to help with epilepsy. I believe a reliable wearable seizure prediction will improve millions of lives.

My play is not an autobiography, but it is inspired by the struggles my husband and I have been through and our commitment to do everything we can for the child we love with all our hearts and souls.